Sony has announced their competitor to Panasonic’s AF100 which has brought the video industry to a new point.  We now have a selection of large sensor video cameras under $10k.  Since the Sony PMW-F3K and RED cameras are out of the budget of most independent production companies or filmmakers, let’s focus on Panasonic, Sony and the current DSLR lineup.

2010 was considered by many to be the year of the HDSLR.  Canon, Nikon, Panasonic and Sony all had their models to pick from.  Canon jumped ahead of the rest with the popularity of the 5D MkII and subsequent models like the 7D and T2i.  Panasonic also took a good chunk of the market with their GH1.  At NAB 2010 we saw every manufacturer and their brother making new gear for DSLR shooters.  But what surprised many was Panasonic’s announcement about their AF100.  Finally a large sensor camera that had the features of a standard professional video camera.  Could it be that camera manufacturers were actually listening to the cries of filmmakers?  Many wondered if the HDSLR revolution was over. The AF100 was released and reviews started pouring in.  The overall feedback was very positive.  The AF100 had features that video shooters had been missing on DSLRs: built in ND filters, viewscreen with zebras, peaking, etc., XLR inputs, HD/SDI output, etc.  But it still wasn’t the “perfect” camera.  It didn’t have the best codec for intense color correction.  The lens choices for micro four thirds were somewhat lacking and due to its 2x crop factor, any lenses you used from other cameras would lose half their field of view.  People were spoiled by the full frame sensor of the 5D MkII and even the 1.6 crop of the 7D. 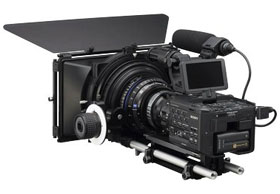 Rumors floated around Twitter about a little brother to Sony’s PMW-F3K.  Then it was confirmed, but Sony still kept a tight seal on it.  Finally we found out over the past few days the full details of the FS100.  Using the same Super 35mm sensor of the F3K, the FS100 looked to be a great option. The body was designed to be very modular, able to go from small and discrete to fully kitted out. This is something DSLR shooters have become very accustomed to. Also the camera demonstrated high sensitivity and very solid image quality with low noise. But upon closer examination, we see how it is limited as to not compete too much with the F3K. Lacking built in ND filters and HD/SDI output is a potential drawback. The build quality has been questioned in some reviews. So again, we see another option that fails to be the “perfect” camera.

Perfection is obviously too lofty of an expectation, but getting a high value to the amount you’ve invested isn’t.  The question becomes, are these cameras worth the premium price over the DSLR you now use?

Before you start looking at charts, spec sheets and sample videos, the first question you should ask yourself is: what is your application? Are you creating content that will be mainly consumed on DVD, internet or local television?  Chances are it will be shown in SD.  But even if it is in HD, it probably won’t be at a level that will benefit from a few extra lines of resolution that the higher end cameras provide.  Now if you are shooting content for theater, Blu-ray, visual effects, or high level clientele, then the higher end cameras should definitely be in your arsenal.

The AF100 comes in just south of $5k and the FS100 is expected to come in under $6k.  For that price, you could get a 5D MkII, 7D and have money left over for a good tripod.  Or you could take that extra money and invest it in some nice support gear like a stabilizer, jib, dolly, etc.  We all know that good video isn’t reliant just on the quality of your camera.  Even more so it is affected by the quality of your audio, lighting, tripod, etc.

Of course, if you are tired of the limitations that the current lineup of HDSLRs have, these new cameras may be right up your alley. Not having to record audio separately, having proper monitoring options, controls that are optimized for video, reduced aliasing and rolling shutter are just a few of the benefits you will get.  Plus you are working with a better codec and more lines of resolution.  Overall, these cameras are designed to be professional tools and not require a lot of the hacks that were necessary with HDSLR shooting.

The exciting part is that we are living in a new era: the democratization of filmmaking.  High quality tools aren’t limited to Hollywood anymore.  There is a tool at almost every price point. With whatever money you have in your pocket, you can invest in a camera that can capture beautiful images.  At the end of the day you can nitpick specs all the way up to a RED Epic or Arri Alexa.  Determine your budget and your application and start shooting!