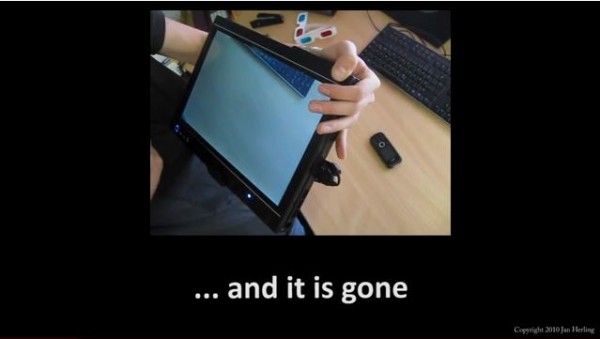 Have you ever had to paint out an object from a scene frame by excruciating frame?  I have, it’s not fun.  Any tool out there that can make that job easier would be a godsend.

Enter Technische Universität with Diminished Reality.  As you can see in the video below, you simply draw a circle around the object you would like to remove and the software does the rest automatically.  In some of the examples where there are more complex patterns around the object, accuracy doesn’t seem to be the greatest.  But this software isn’t ready for prime time just yet, plus with a little TLC I’m sure it could do a better job.  Much more accurate results should be possible without the need to do this in real time.  Anything to help automate the process would be awesome!

The software achieves this in a clever way.  The image is reduced in quality, the object is roughly removed and as the quality is brought back up it re-enhances in just 40 milliseconds per frame.  It currently runs on Windows and is planned to release on Android.  Here’s hoping they release a plug in for After Effects.