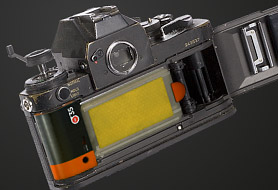 This could very well be vaporware, but I sure hope it’s not. A new website has popped up, advertising a soon to be available product that would convert any 35mm film camera body into a digital capable product.

Called RE-35, they are offering 3 different cartridges in 4, 8, and 12 megapixel formats. They are using a flexible sensor technology that allows the user to put the cartridge into the camera like you would any normal roll of film, and then pull the sensor out of the cartridge as if loading film.

The images get saved to flash memory built into the cartridge and can be downloaded via USB. They have also gone one step further and added integrated editing software into the cartridge, allowing it to be a stand alone product.

Pricing and availability are unlisted currently, but they suggest a release later this year.

I don’t know about you, but I’m excited to turn my rangefinder into a digital camera.

[UPDATE] Sure enough, this was an April fools joke.  Site has been taken down due to too much traffic.