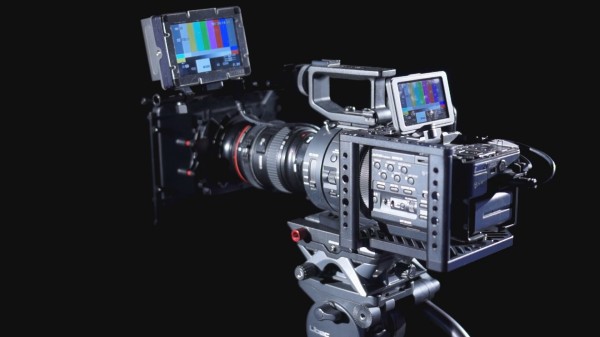 Wait, what?! Didn’t you look at the Blackmagic Cinema Cameras (Pocket & 4K editions)? Surely they were the biggest hit of NAB 2013.

Well I’ll admit they had a ton of buzz and will probably sell like hotcakes to eager filmmakers hoping to spend a few bucks and have a magical movie making machine. The problem with the BMC cameras is that they aren’t the best for a wide range of productions. Studio work – CHECK! Green screen work – CHECK! Commercial productions – CHECKAREENO! Web video…ummm… Event shooters, documentary shooters….errrr, uh….

Don’t get me wrong, I’m all for companies innovating and Blackmagic has certainly done that. But I need a camera that does many things well, not just one.

That’s why I purchased the FS700 close to a year ago. I was very impressed with the long list of features…ND filters, Cinegammas, super slow motion, etc. 4K was something I was hopeful for but wasn’t the main reason I purchased the camera. But with NAB 2013 fast approaching, I was eager to see what Sony would be announcing for 4K and what third party support would be available.

The NAB Show doors opened Monday morning and I headed towards some of the recorder manufacturers I knew from previous years. Atomos…nope, no 4K. Ki Pro…they had their Quad but not much new information. Convergent Design…hmmm, what’s this Odyssey thing? Oh, wow!

I’d seen gear from Convergent Design before and hadn’t found anything that I really needed for my production. That all changed with the Odyssey7Q. A 4K recorder that was officially supported by Sony that also happened to be a very sweet professional field monitor. So instead of slapping a giant brick to the back of your camera (Sony’s recorder option) I could consolidate my monitor and recorder into one device. Big thumbs up! Then they started listing off features including a wide gambit of codec support that I only need to rent or purchase if a shoot calls for it. That keeps costs down for me. Also the ability to shoot 240fps continuous RAW. Not saying I’ll need it often, but it’s very handy to have if a production calls for it.

Then I headed over to Sony to get the low-down on their 4K upgrade path. Low and behold, they had a Odyssey7Q hooked up to their FS700. That means Sony is embracing this as an option for FS700 owners. While talking about 4K with Mr. Juan Martinez, he casually noted that the FS700 would be getting S-Log 2. Whaaa-wha?! You mean the thing that I’ve always wished for and envied in F3 owners? RAW is great, but I expect to be living in a 10bit Prores or DNxHD workflow so S-Log will be my best friend. 4K and HD RAW when I need it, but HD 10bit for most everything else.

After NAB 2013, I really, REALLY am happy with my FS700 purchase. It just became the best value camera on the market. There’s really nothing else more I could realistically want from the camera. And the best part is it still shoots to the very robust AVCHD codec on board when I don’t need 10bit. Again, this keeps me lightweight for event shooting and web video. To do that on a RED, you need a $13,000 module. No thanks.