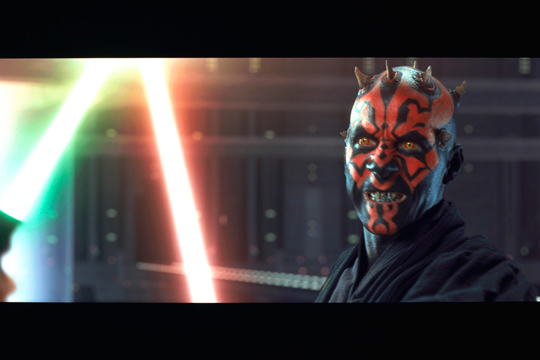 Rick McCallum Star Wars Producer was on record for calling 3D a gimmick. So what has changed to give Lucas Film and IL the incentive to converting the Star Wars saga to 3D?

Basically it boiled down to “quality” and that meant quality in the theaters as well as the skill at the editing suite. Since the Jump to 3D in theaters many cinemas have upgraded their older equipment leaving the last major hurdle, how to preserve the quality of the Star Wars films with out it looking as if 3D was an afterthought.

A lot of testing has all ready been done at Prime Focus just to see if the quality was there to go 3D. Standards are so high for the Phantom Menace that the conversion has to be virtually pixel perfect says Matt Bristowe of Prime Focus. Prime Focus uses a proprietary technique called “View-D” along with some very sophisticated rotoscoping and mMagic which is keep very tight lipped!

If you are a 3D fan then lets hope that all is a great success for The Phantom Menace, which will hopefully give the green light to convert the remaining Star Wars Films.