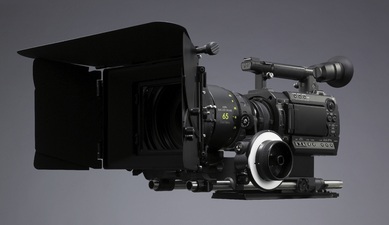 We saw glimpses of this camera at NAB 2010 but everything was pretty hush-hush. Now Sony has officially unveiled their new PMW-F3K camera. Don’t get too excited HDSLR shooters because the F3K is set to compete directly with the RED One camera with a MSRP of around $20,500.

The PMW-F3K is part of the CineAlta 24P family of digital cinematography products and its support for multiple frame rates includes a filmic 23.98P as well as S-Log workflows.

Sony’s Exmor™ Super35 CMOS sensor was designed with the benefit of two decades experience in Digital Cinematography, pioneering digital HD acquisition for feature films and broadcast TV through the legendary CineAlta product range. It brings a true ‘film look’ and superior image quality into reach for independent movies, pop promos, commercials and other applications, as well as making the PMW-F3K an ideal B-camera for high-end feature film production.

So for now, it doesn’t look like the Panasonic AF100 will have any direct competition when it launches.  It will be interesting to see if the F3K will indeed give RED any competition.