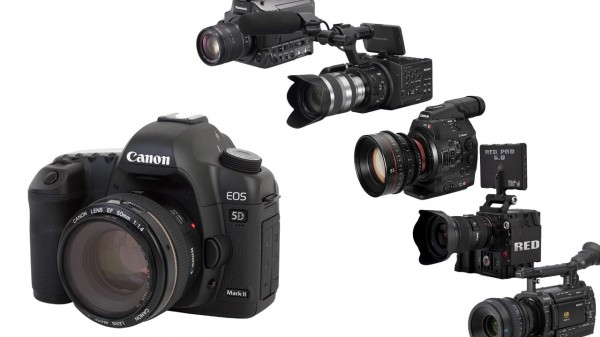 “What is the best camera for me?” …If I had a nickel for every time I heard that question…well I could probably purchase every camera and tell you.

Today it’s a lot harder to choose which camera to purchase simply because there are so many to choose from. Only a few years ago this wasn’t the case. In 2008, if you wanted the “large sensor” look for your video you pretty much had two options: get a 35mm “Depth of Field (DOF)” adapter or rent a Red One. Then one day a DSLR came to market with a little feature added in for photo journalists. Something they could take short web videos with so they didn’t have to carry an extra video camera with them on location. But when the indie film market saw the images that these DSLRs were producing, they quickly adopted them as a new form of acquisition. The problem was we were all using a fluke for our video work and not a professional tool.

Still from 2009 through early 2011, every cinematographer I knew had a DSLR in their camera bag and was shooting on it almost primarily. Of course camera manufacturers couldn’t ignore this for long and at the beginning of 2011 Panasonic released the first “large sensor” true video camera. The AF100 was an exciting breakthrough for filmmakers, though the micro four-thirds sensor was a turn off for many. Not to be outdone, Sony plopped the FS100 and F3 in the laps of eager professionals, giving them the choice between affordability or broadcast ready. Many were eager to see if Canon would finally cram a large sensor into a professional body and before 2011 was out, they announced their C300. Perhaps the most disappointing announcement as the price was aimed purely at the pro shooter leaving enthusiasts to keep tinkering with their DSLRs. And of course, after years of empty promises and missed dates, Red finally gave us the Scarlet. This has paved the way for second generation cameras coming less than a year after their counterparts; namely the Canon C500 and Sony FS700.

Today, those cinematographers I mentioned earlier who shot solely on DSLR each have a camera that fits their needs best. In fact I know five different video professionals that have an AF100, FS100, C300, F3 and Scarlet respectively. Goes to show you how diverse the market truly is. I myself just purchased Sony’s new FS700 which would make six of us with six different cameras. Now I will point out that we all still carry around our DSLR as the perfect B-cam and I don’t think I will ever be without one. That said, I can’t imagine shooting my professional work on anything less than a professional camera today.

I did shoot on my 5D MkII for two and a half years before upgrading to my FS700. With my DSLR I produced many commercials, corporate videos and short films which still hold up today. But after shooting on cameras like the C300, FS100, FS700, F3, etc. I can say that the day of the video DSLR being king has ended. Large sensor video cameras are optimized for video production and make life a lot easier. Most of them will produce an image that is vastly superior to DSLR. Whether it shows up in your final edit is affected by many factors, including color grade, resolution output and bitrate. But I can honestly say that looking at my 5D footage at 100% next to my FS700 footage at 100%, hands down the FS700 wins in every category.

So to answer the question in the title of the post, I would say that if you consider yourself a professional and you are charging clients for a video service, I think it’s time to upgrade from your DSLR. Large sensor video cameras are available at any price point and offer vastly improved image quality as well as features and ergonomics. I challenge you to rent a FS100 for a day or two and see how you like it. After dealing with all the work-arounds, hacks and compromises necessary for DSLR video, it will be hard to go back once you’ve tasted a true video camera.

If you are just a hobbyist, that extra investment may not be necessary for you. The great thing about DSLR video is that it is so cheap to get into; a lot cheaper than it was when I was starting off with a Canon HV20 and a DOF adapter rig. For half of my initial investment in that rig and a fraction of the size, I could get a used T2i and start learning video. Then when you are ready to move up, there are cameras at every level waiting to meet your needs.