Interview with Patryk Kinzy – Filmmaker of The Chapel 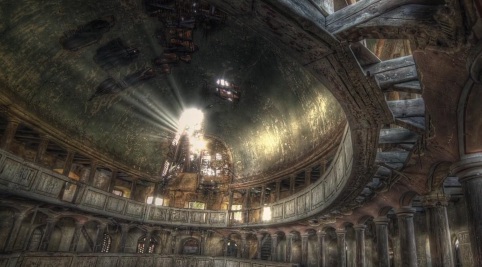 Patryk, Welcome we are very excited to be speaking with you today! Let me start off by saying Wow, The Chapel was beautifully shot and edited! Let’s kick it off by getting some more information about you for those readers who may not be familiar with you and your work.

JW: So, where are you from and what got you first interested in making movies?

PK: Well, actually it is a long story. I have an extensive background in digital visual arts. First of all, I’ve been practicing photography for a long time, I started back in 1998 on medium format analog cameras, but then took a long break. Since around 2003 I’ve been involved into graphic design and motion design and since 2006 I’ve been running a digital creative agency. I’ve been designing for some time, now I mainly manage the agency and give creative and art directions to my team. So I have got a lot of experience working with the digital image of all kinds.

Since 2007 I’ve been involved in the astrophotography and in 2008 I built my backyard observatory where I take pictures of the night sky. This experience contributed highly to deepen my skills as this is an extremely difficult realm. The amount of light that comes to us from faintest nebulas and distant galaxies is very low and it is really a challenge to create such images as these you can find on my personal blog devoted to my astrophotography (www.kizny.com). So comparing to the astrophotography, shooting timelapse or managing comprehensive film post processing workflows is a piece of cake. Really.

JW: I assume that you didn’t start out making time-lapse photography, How and when did that aspect of your film making come about?

PK: At the end of 2009 I decided to get back to photography and got myself a 5DMKII. Quickly it turned out that it has a nice video feature and since that discovery I rarely shoot stills. It was October and in November I accidentally stumbled upon the timescapes forum and got lost for about a month digging through that forum and other resources over the network. I got seriously into timelapse. So I’ve been involved in both cinematography and timelapse for not much longer than a year now. But having a wide experience in digital visual creation of various kinds it was relatively easy for me to get to quite high level in short time.

JW: You seem very young to be so talented, did you go to university for photography or film making or is this a life long passion that you have for creating beautiful movies?

PK: I studied culture sciences at the local university, so regarding visual creation I am a self-taught.

Lets talk about The Chapel a little bit because I know some of our readers are curious about you and this project. You have what looks like are a lot of elements layered together that gives you a very unique look in this movie, just amazing!

JW: What was the inspiration for this project or did you just ride by one day and say, Hey it would be cool to try and shoot a movie in that place?

PK: With Bob, who is my partner at DitoGear, we get together from time to time to test out a new gear upgrades and go for a few day shooting sessions in interesting places. We found a few interior shots of this church over the Internet and Bob has spent a lot of time to find this place basing only on vague description and interior shots. Google helped.

We headed to that place with no precise idea of the film, we knew that the place is extraordinary and let it inspire us. We did not do any location scouting to check the place out before shooting. But when we got inside finally, the excitement and the magic of the place led us through the creative process.

JW: We are starting to see movies emerge now where two identical images are taken and one is underexposed and the other is over exposed then merged together. Is this similar to what you have done here with The Chapel?

PK: There are actually two kinds of HDR motion picture – the first is shooting video using 2 passes with different exposure or with a beam splitter and then processing them together to widen the dynamic range beyond the level of what camera can capture, the latter is taking a bracketed exposures frame by frame and then merging them into 32 bpp HDR images, tone mapping them to 10 or 8 bit final image color depth that can be displayed by computer screens. We did the latter.

JW: The natural lighting was very dramatic, did you use any additional lighting equipment?

JW: ln the Making of The Chapel I heard you say that it took about an hour to set up one shot. How long did it take to shoot The Chapel?

JW: I see what looks like some pretty sophisticated gear that you were using. What kind of equipment did you use to automate shooting your footage over such long periods of time?

PK: We use the DitoGear™ equipment that we actually have designed and produce and sell. The Chapel was shot on DitoGear™ OmniSliders (2.0m & 1.5m) versions. You can check out this gear at www.ditogear.com

JW: I also noticed that you used DSLR cameras to shoot The Chapel, Do you use DSLRs exclusively in your line of work or do you use other types of video equipment?

PK: The Chapel has been shot exclusively on Canon DSLR cameras. In commercial work we’re not limited to these cameras, but use them quite often.

JW: The 5d Mk II was the main camera you choose for this project, What other DSLRs did you use (why and where)?

PK: Although we had a whole bunch of Canon cameras (1x 5D, 1x7D, 1x550D, 1x 50D, 1x30D) finally I used mainly the footage shot on a 5D, with exception to the intro where some selective shots from a 550D were used. The timelapse footage quality from other cameras is significantly lower and simply do not edit well, especially when aggressive tone mapping effect is applied.

JW: Did I hear you right, when you said there were 20,000 plus images used to make The Chapel, that had to get overwhelming or did it?

PK: Yes, for this project we shot around 20K stills plus video footage. Well, it takes a lot of processing power to go through all this, but I have recently made an investment into quite powerful Mac Pro Octo and also built my workflow that way, that I can use all 8 cores for most demanding processing. So it goes well.

JW: I would imagine that it took a lot of hours to complete the final render of The Chapel, How long did that take anyway?

PK: The final render, the very last step was not time consuming as the most processor heavy operations go first. Most demanding is dealing with 21MP RAW images, combining them into HDR 32bpp images and tonemapping to intermediate 16bpp TIFF files. That takes time and space. As I said, it was all together about 2 weeks of post.

JW: I know the music wasn’t your work, but tell me more about the music and the process you took in selecting something that fit the mood of a movie like The Chapel.

PK: Actually it was not a selection. The music was composed exclusively for the film by a great composer, Tomas Leonhardt. I have also a significant music background (been playing guitar and sax for a few years) and I am really demanding in terms of choosing the music prior to editing. I never start the edit unless I am sure I have the music I need. Tomas did a great job and created a piece that drives the entire piece forward. It is really an important component of the entire film.

JW: Correct me but The Chapel has received somewhere around 500,000 views in just 30 days, is that right? Pretty exciting, So is it safe to say The Chapel has gone Viral?

PK: Not exactly. In fact The Chapel has been online since Oct 2010 and in about 3 months got only about 15K views on Vimeo and via our websites. It was sort of difficult to give it a serious pace. Actually it takes much time and effort to create such film, but it does not guarantee that it would be watched and you need to work a lot to make people watch the stuff.

I’ve been in touch with Patrick Hall from the FStoppers and Patrick suggested that It would be beneficial and interesting for their audience to get to know a bit more about the process behind this film. So we decided to shoot and edit this “Making of” film and I guess that helped to move forward.

Patrick published these 2 films on their site, but I have also been in touch with guys from major video and HDSLR sites around and we pushed the film wherever possible. That helped a lot, but the highest momentum has been gotten when The Chapel got published by Gizmodo.com. I think that it is Gizmodo that made the figures.

JW: Tell me Patryk, what’s next for you?

PK: We have a few ideas for shooting next personal, non profit projects, but some serious assignments for big players out there are also being hammered on. Definitely this will be an interesting years for my filmmaking. And it’s worth mentioning, that I am open to either commercial or art collaborations so, dear reader, if you have a really interesting project that you would like to invite us to, you’re welcome.

Some of my websites and links: