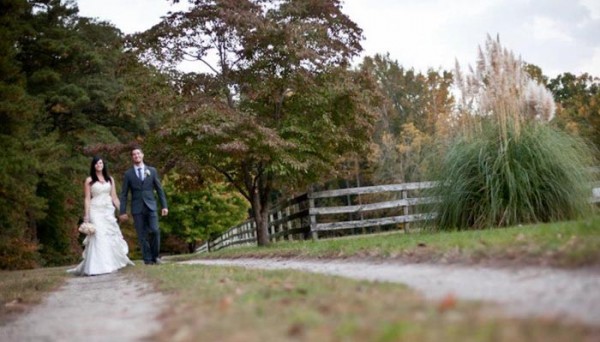 Several months ago, my wife and I were asked by some old friends to shoot their wedding. My wife as the photographer and myself as videographer. I’ll be honest, wedding videos are not my favorite things to shoot. Usually people want every moment captured which turns into hours of edited video that no one besides the couple will ever want to watch. You may end up with a bridezilla who is overly demanding or an officiant who doesn’t want you anywhere near the stage. It may be indoors in poor lighting or in a building with very uninteresting scenery. The truth is, sometimes it’s hard to make a wedding video look good.

This time, however, I went in with a few things in mind. I knew the wedding was going to be outside (big plus for lighting and shooting style). I had just gotten my FS700 in so I was eager to test it out in an event shoot. But perhaps most importantly, I told the couple that I was going to shoot a wedding film, not just a wedding video. Call it what you like: event filmmaking, wedding film, cinematic wedding…in the end it simply describes the current trend in wedding video. Rather than recording and editing the full two hours of the service and reception, the shooter turns the footage into a highlight film of the day. Usually these films can range from seven to fifteen minutes depending on your shooting style. The best part about them is that they are much more enjoyable for friends and family to sit through.

With that in mind, I started planning for the shoot. We live in Green Bay, Wisconsin and the wedding was going to be in Virginia which meant flying with minimal gear…no jibs, dollies, sliders or steadicams. Of course I had my trusty FS700 kit which is perfect for carry on. I didn’t have room for extra luggage so if I wanted any extra gear it would have to go into my suitcase. Fortunately my Manfrotto 561BHDV fits perfectly in my suitcase with my clothes. Since it was just me and my wife flying down, I wouldn’t have a second shooter so no extra cameras were needed.

The wedding day came and I started running around getting shots of before the ceremony. This is where I first began to really enjoy having slow motion for a wedding. 90% of the slow motion I shot at 60 fps (I shot the “real-time” footage at 24 fps) which was plenty slow for the effect. There were a small handful of 120 fps and 240 fps shots I tried, but most of the time they ended up way too slow. Slo-mo really came in handy when I needed a shot to be more stable. Shots that I would usually use a jib, slider or steadicam suddenly were back in the picture (pardon the pun) when I went handheld in slo-mo. All the handheld jitters melted away into smooth fluid motion. Another big benefit of the FS700 that I couldn’t have lived without was the built in ND filters. Going from shaded trees to indoors to bright sunlight kept me flipping between the entire range of the filter wheel.

Ceremony time. I had a my Sennheiser G3 wireless lav mic on the pastor for audio and my built in mic for any crowd audio I might want to edit in. I spoke with the pastor before hand to verify that he would be by the bride and groom during their vows. This way I only needed the one mic. I had also recorded the music for the ceremony with the guitar player and violinist during their practice earlier that morning. That way I knew I could cleanly edit them in later. As everyone began walking into wedding area, I was met with my first major challenge. Since I was shooting this as a “one-man-band”, I knew I would need to be running around to get every angle I could so that the film wouldn’t just have a single shot of a talking head for each major moment. This required a lot of planning on my part and knowing the exact order of the ceremony. I did not want to miss the bride walking in, or the groom’s reaction, or the kiss, etc. I knew I’d be shooting mostly behind the audience which required a lens with good range. My 18-200 FS700 kit lens was hugely helpful for this. Also having autofocus was great for moments I couldn’t reach the focus barrel (like when I put the camera up high). Having the monopod proved a big benefit too. Shooting long picked up every little camera shake and, even with a shoulder rig, I would have gotten very tired and shaky by the end of the service. The monopod kept me stable and less fatigued. The b-roll before the ceremony I shot on my Canon 24-70mm f/2.8.

I let the camera run continuously even while moving so I wouldn’t miss any of the audio. Looking back and planning for the future, I may use my Zoom H4n for audio capture so I don’t have to keep recording on my camera. This would also allow me to shoot slo-mo during the service (recording slo-mo doesn’t record audio) which I was unable to do in this wedding. Immediately after the service, I grabbed the bride and groom and shot a couple closeups of the rings and the kiss that I couldn’t get during the ceremony without being in the way.

Reception time. The reception was being held in an outdoor tent with Christmas lights for lighting. Not the best scenario. Fortunately I was able to switch to my Canon 50mm f/1.4 and shoot at ISO 2,500 to get perfect exposure. The couple had a great barbershop quartet who sang for close to an hour… definitely not something you want to include in its entirety. At the end of their set, the couple came up and had their first dance. Perfect! This would be a great way to incorporate the quartet and the first dance in one edit. I knew I wouldn’t be using the entire song for the edit so I recorded the beginning then switched to slo-mo for some closeups, while being sure to get the very end which I was able to smoothly blend together. Now the dance floor opened up and it was time to party. I turned up the shutter speed on the camera so the dancing was more energetic. Of course I got some great slo-mo shots of the dancers which everyone enjoyed. I used my Tokina 11-16mm f/2.8 for some of the dance floor shots for a cool, wide-angle look. At f/2.8 I had to turn the camera up to ISO 5,000 but I was very satisfied with the result; minimal noise in the well exposed areas which I was able to reduce even more with Neat Video.

The festivities were winding down and the evening was almost over. The cutting of the cake came next (can’t forget to get a quick shot of that) followed by the final activity: Chinese Sky Lanterns. We made our way out to the field and everyone started lighting up their lanterns. I was working in pitch black lighting but I still wanted my Tokina wide-angle lens so I shot all the way up to 10,000 and 20,000 ISO…the max. Even though the noise was increased, I was able to “get the shot”…something I wouldn’t have been able to do with any of my previous cameras. Everyone let their lanterns float off into the night sky and I had the end to my film.

Edit time. I brought all the footage into Adobe Premiere and began my edit. I started with the wedding to see how things would come together. I was pleasantly surprised at how well I had done to get sufficient coverage. I had made sure to get moments of the officiant, bride and groom talking as well as reaction shots of each of them. This allowed me to easily cut each of their vows from a few minutes to several seconds. After the wedding was over, I chose the best moments from the reception to transition into the first dance, cake cutting and lanterns. Music was a combination of tracks I had recorded during the wedding and royalty free music I owned. Finally I went back and selected the highlights of the morning to include at the beginning of the video.

In the end, I was very pleased with the result. As with a Hollywood film, two different directors can look at a script and make a drastically different movie. So it is with weddings. For wedding videos like this, you really have to look at yourself as a filmmaker…seeing the day and telling their story through your lens.

So now that it’s all over, what would I change? As I mentioned before, I would record audio to my Zoom H4n so I could free up my FS700 for slo-mo shots during the wedding. I would prefer to shoot with a second shooter to give myself even more opportunities for other angles and reactions. If the wedding is local, I wouldn’t mind having a slider or steadicam for certain shots but only if I have the time and an assistant.

If/when I shoot another wedding like this, I will be sure to show the couple this video and explain that their wedding, while it understandably will not be identical to this, it will have a similar tone and feel. I am not in the market of copying someone else’s style or doing special orders. If they like my style, I will produce them a great wedding film. If they want things different I will kindly ask them to hire someone else. Better to have that discussion beforehand than after.