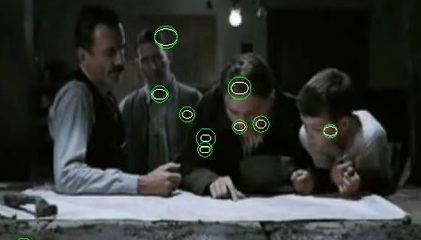 A Directors job by definition is to “Direct”, this means hands on with virtually every aspect of the film making process. This specifically includes film techniques like Blocking and Camera angles, giving the Director the best dramatic effect in a scene. So, when you or I see a film or video the lens is our eyes into that world, our focus is directed into a specific area or is it?

Introduction Tim Smith, Tim isn’t a famous film Producer or Director, Tim is actually a psychological researcher at the University of London where he studies the Why you and I look where we do at stills and moving images.

Part of Tim’s research, the DIEM Project as it’s called  has led to some interesting findings. Lets watch a short clip from There Will Be Blood, Focus on the green and white circles on the screen, notice how they move, grow and shrink. What you are actually seeing are the test subjects eyes, what they are looking at and how long they are focused in on one area, Note: the longer the focus the bigger the circle.

Tim’s research helps explain why most people never notice changes in continuity, by that I mean imagine a scene where there’re two people talking, cut to one actor wearing a scarf but in the next scene the scarf is gone or changed color! According to Tim’s research the average person will focus their eyes for about 300 milliseconds or 1/3 of a second in one location. While more saccadic eye movements will only last for 15-30 milliseconds!

What Tim is proposing is a more laid back approach to film making, similar to some non U.S. film makers and allow actors to carve out a scene instead of the Director or  Producer cutting away, leaving footage on the cutting room floor, maybe not in our digital age but you get the gist. The research has shown that the more you go to the movies or watch TV the entertainment industry has ultimately trained its views to react to two stimuli  Movement and Contrast.

How will you film and edit your next project?