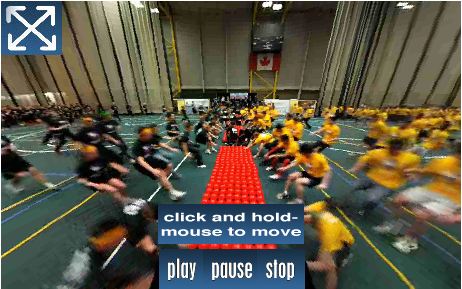 Photographer Ryan Jackson captured the world’s largest dodgeball game at the University of Alberta using 4 GoPro HD Hero cameras.  Creating a 360-degree panoramic video. A basic run down of how he accomplished this is he imported the footage into Final Cut Pro, created a project that held all 4 videos side by side, synced them, exported each frame and stitched them together, and then imported the stitched images back into Final Cut Pro.  Once he cut the shots he wanted, Ryan exported the .mov converted it to a .flv and used a panoramic player to display the 360-degree video.  Easy peasy.

For a geeked out, more in depth version of what shortly described, check out Ryan’s blog.