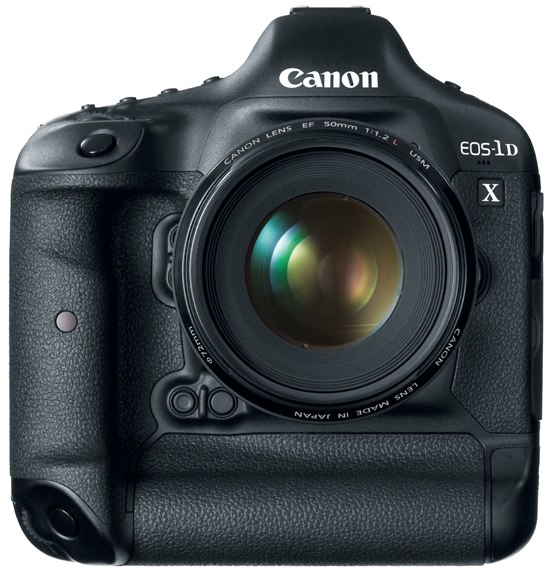 Canon seems always ready to make a move no one expected. A lot of people wondered where the 1Ds MkIV was and why it never was released around its normal product cycle. Well we now have our answer. Canon has combined the 1Ds and 1D line of cameras into the 1D X. This camera features a new 61-Point Autofocus, fast shooting up to 12 fps, 18-Megapixel Full-Frame CMOS Sensor, Full HD Video Recording and much more. One of the more impressive features of the camera is its brains.

That’s all well and good, but what about the video?!

Centered around an all-new full-frame CMOS sensor with larger pixels than those found on the EOS 5D Mark II image sensor, the EOS-1D X utilizes new HD video formats to simplify and speed up post-production work. The two new compression formats offered on the EOS-1D X include intraframe (ALL-i ) compression for an editing-friendly format and interframe (IPB) compression for superior data compression, giving professionals the options they need for their ideal workflow. Answering the requests of cinematographers and filmmakers, the EOS-1D X includes two methods of SMPTE-compliant timecode embedding, Rec Run and Free Run, allowing multiple cameras or separate sound recording to be synced together in post production.
Canon’s all new full-frame CMOS sensor ensures that video footage captured on the EOS-1D X will exhibit less moiré than any previous Canon model, resulting in a significant improvement in HD video quality. A desired feature for many documentary filmmakers using Canon DSLRs was to enable recording beyond the four gigabyte (GB) file capacity and the EOS-1D X is the answer. The new camera features automatic splitting of movie files when a single file exceeds 4GB. The new file splitting function allows for continuous video recording up to 29 minutes and 59 seconds across multiple 4GB files; no frames are dropped and the multiple files can be seamlessly connected in post production, providing filmmakers the recording time they want in the same convenient DSLR form factor. The camera records Full HD at 1920 x 1080 in selectable frame rates of 24p (23.976), 25p, or 30p (29.97); and 720p HD or SD video recording at either 50p or 60p (59.94). SD video can be recorded in either NTSC or PAL standards.
The Canon EOS-1D X also includes manual audio level control, adjustable both before and during movie recording, an automatic setting, or it can be turned off entirely. A wind filter is also included. Sound can be recorded either through the internal monaural microphone or via an optional external microphone through the stereo mic input.

According to planet5D, the ISO range, moire and jello has been improved as well:

Standard ISO range is 100 – 51,200 – this range is 2 full stops higher than Canon EOS-1D MKIV (about 5 stops higher than the 1Ds)
Expanded ISO is 50, 102,400 and 204,800.
We also are told we’ll see major improvement in the moire and jello handling of the sensor which is one of the biggest complaints about the current sensors.

The Canon EOS-1D X Digital SLR camera is scheduled for March 2012 availability and will be sold in a body-only configuration at an estimated retail price of $6,800.00.

So there you have it. Still not the perfect video camera, but a major improvement over its predecessors. If you’re looking for more video features than that, you’ll have to wait for Canon’s November 3rd announcement.