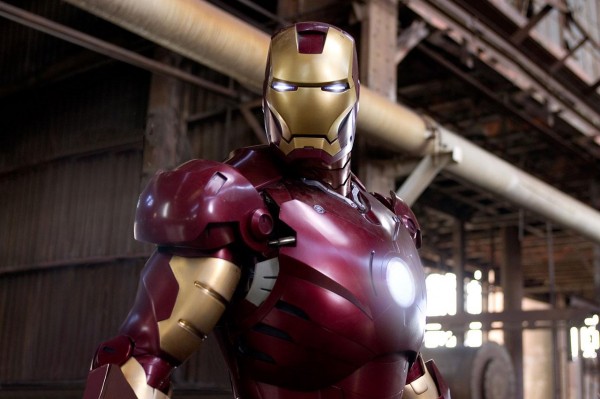 This is the first in a new series of articles I’m entitling “Analyze the Frame”. In this post series I want to take a simple frame from a movie and analyze what’s going on to create it. Often the simple scenes are the easiest to overlook, but the most important to master in creating a good film.

The first frame I have is from Iron Man 2. Click on the image to see it larger.

This is in a scene towards the end of the movie in which Tony Stark is talking to Nick Fury about the Avengers. You can see a short clip of the scene in the trailer at 3:35.

Now I’m not going to pretend that I was there on set and saw how this scene was exactly shot, but together with a little observation, we can dissect the main elements that made up this shot. First off, let’s look at the key light. From what I can tell, there looks to be two light sources from camera left. The first is the primary key on Tony Stark. This is a softer light that wraps around the majority of his face. The second is a harder light that acts as somewhat of a rim light. This brings a bit more dimension to the lighting while still maintaining a camera left motivation.

There is fill light bringing up the exposure of the other side of Tony’s face. Whether this is a third light or purely ambient fill is hard to say. Notice though how there is no edge light on camera right. If you’ve heard the traditional 3 point lighting technique once, you’ve heard it a hundred times, and while it works well for basic interviews, you won’t see it done verbatim often in films. Instead, the DP (director of photography) used a brighter background to provide separation between the foreground and background. This is a very important technique that novice filmmakers sometimes forget about.

In addition to a brighter background, we can see that haze/mist is used to add some more depth. We also have some rays of light in keeping with the directional motivation of the key light. Last thing I will point out is how the background is dressed up. Notice the random machinery and crates in the background? As random as it looks, it’s deliberately been placed there to make the background a bit more interesting. A good set designer makes the DP’s job a lot easier.

Well there you go! Our first frame analyses. I’m sure there’s more things we could examine just from this one frame. What else do you notice?